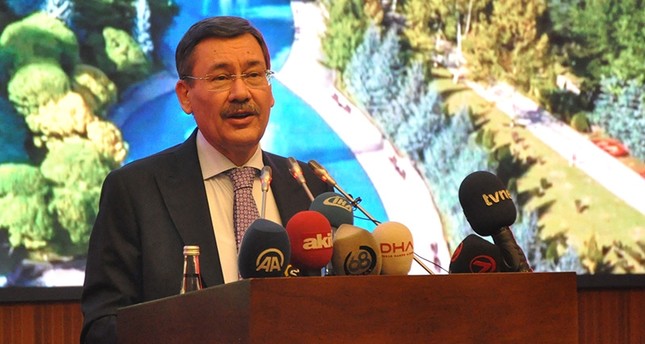 28/10/2017 (Sabah – Turkey): Melih Gökçek, the mayor of Turkey’s capital Ankara, has announced his resignation on Saturday after serving for 23 years, amid the rejuvenation bid in the ruling Justice and Development Party (AK Party) prior to 2019 elections. Gökçek convened the municipal council Saturday to announce his resignation. While members from the AK Party attended to the meeting, members from the main opposition Republican People’s Party (CHP) and opposition Nationalist Movement Party (MHP) declined to attend. Recalling his 23 years of service in Ankara and counting some of the improvements in the city, Gökçek said that he decided to take this step after a call for his resignation from President Recep Tayyip Erdoğan…

28/10/2017 (Emirates 24/7 – UAE): H.H. Sheikh Hamdan bin Mohammed bin Rashid Al Maktoum, Crown Prince of Dubai and Chairman of Dubai Executive Council, has witnessed the signing of agreements between Smart Dubai and a number of government entities to implement the Dubai Digital Certificates initiative. The entities that inked agreements with Smart Dubai included Dubai’s Supreme Legislation Committee, the Department of Economic Development, DED, and the Department of Land and Property. The accord follows directives from His Highness Sheikh Mohammed bin Rashid Al Maktoum, Vice President, Prime Minister and Ruler of Dubai, to government institutions in the emirate to work together to preserve its digital wealth…

28/10/2017 (Ekathimerini – Greece): It is a recurring nightmare. “Once again, as in every year since 2013, Nemea is about to close due to a lack of guards. The temporary staff will begin to leave early next month, and they will be gone a month from now,” Stephen Miller, professor emeritus at the University of California at Berkeley and director emeritus of the Nemea excavations, warned in an open letter on Tuesday.  The five permanent staff members cannot watch over the museum and archaeological site 24 hours a day, seven days a week. The site will close for the next few months…

28/10/2107 (Arab News – KSA): The Ministry of Environment, Water and Agriculture, the National Center for Palms and Dates, and the Saudi Technology Development and Investment Company (TAQNIA), studied plans to establish the biggest regional factory to benefit from palm, date and agriculture waste. This came during a meeting presided over by Ahmed bin Saleh Ayada, undersecretary for the ministry; Sulaiman Al-Khateeb, chairman of vegetable resources at the ministry; and Mohammed Al-Nueiran, president of the center, to study the establishment of the first regional factory to turn waste from palms and dates into products of economic value…

28/10/2017 (Al Arabiya News – UAE by Saad al-Sowayan*): After the kingdom of Saudi Arabia was united by founder King Abdul Aziz, our country was transformed from rival tribes and scattered regions into a prestigious and existed entity. After the unification came the foundation stage, then came the construction phase. These hard times united us and gave us a prestigious homeland and an identity we are proud of. During this period, the first step of which was taken by Harba Ibn Jalawi at Bab al-Masmak, our country experienced many crises and was able to overcome them smoothly in a way that exceeded all expectations, the most recent was the question of the transfer of ruling from children to grandchildren…

28/10/2017 (Ahram Online – Egypt): Canadian special forces have temporarily suspended military assistance to Iraqi troops due to tensions between the Middle Eastern country’s military and Kurdish fighters, the defense ministry said Friday. Cooperation will resume “once more clarity exists regarding the inter-relationships of Iraqi security forces, and the key priorities and tasks going forward,” said Dan Le Bouthillier, a spokesman for Canadian Defense Minister Harjit Sajjan. Earlier Friday, Iraqi forces paused operations against the Kurds to allow for talks after the two sides — both armed and trained by the US — exchanged heavy artillery fire in the latest flare-up of a crisis sparked by a Kurdish independence vote last month…

21/10/2017 (Gulf Times – Qatar): US Secretary of State Rex Tillerson praised the role which Kuwait played ‘to diplomatically seek a resolution’ for the ongoing Gulf crisis, while US President Donald Trump lauded His Highness the Emir of Kuwait Sheikh Sabah Al-Ahmad Al-Jaber Al-Sabah and his influential role in the Middle East region. In statements reported by Kuwait News Agency (KUNA) on Saturday, Tillerson hailed the Kuwaiti mediation and its role in finding a diplomatic solution to the Gulf crisis. Tillerson also welcomed Kuwait’s recent commitments to several of ‘Trump’s regional priorities,’ he noted, as Kuwait ‘responded to Trump’s historic call for action’ during the Riyadh Summit to defeat the ISIS and prevent terrorism and violent extremism’. For his part, US President Donald Trump thanked HH the Emir of Kuwait ‘for all that he is doing in the region,’ saying ‘there is a lot of things happening in the Middle East’…

21/10/2017 (Al Arabiya – UAE by Azeem Ibrahim*): Yemen is still one of the worst humanitarian disasters currently ongoing in the world. The conflict, which began when Houthi militias refusal to accept the political transition of power, is not ‘sexy’ enough to hold the attention of the international press for sustained periods of time, but it rages on, causing ever mounting human suffering on a mass scale. So far, tens of thousands of civilians have been killed, three million have been displaced from their home, and due to the destruction of infrastructure, as many as 17 million are at risk of famine: in a country with a population of around 28 million. But the worst affected, as often is the case in these kinds of conflicts, are the most vulnerable. In particular, the children. As many as 80 percent of children in the country are affected by the famine and in desperate need of aid…

*Azeem Ibrahim is Senior Fellow at the Centre for Global Policy and Adj Research Professor at the Strategic Studies Institute, US Army War College.

21/10/2017 (Emirates 24/7 – UAE): The combined value of the Expo 2020-related development projects has touched US$33 billion, AED 121 billion, as the UAE begins the three-year countdown for the six-month-long mega global event that will kick-off on October 20th, 2020, according to BNC Network, the largest and most comprehensive project research and intelligence provider in the Middle East and North Africa, MENA, region. These projects include transport infrastructure, such as the expansion of the road networks, several highways, roundabouts, interchanges and Dubai Metro line to connect to the Dubai Expo 2020 site, Al Maktoum International Airport, DWC, to the rest of the main city of Dubai as well as mixed-use projects, residential, commercial, hospitality and golf course…