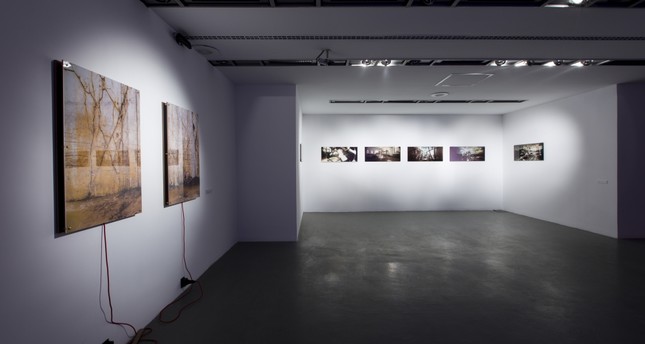 28/05/2016 (Sabah – Turkey): Not long ago, in a gallery on Istanbul’s İstiklal Avenue, I came across an artwork that left me perplexed about how to approach it. Made of particle board, brass, optic quality acrylic, vibrational motors and a capacitive sensor, Doruk Kumkumoğlu’s “Unearthed” looks like a diptych photograph from afar. But that first impression changes once you come near the work. As you approach it, electric cables emerging from the canvas catch your attention. Only when you come closer and move your hands around its surface does the work start making sounds and vibrating and suddenly alive, the work responds to your movements and your position. The closer you get to it, the louder it gets…

28/05/2016 (Gulf News – Qatar): New York: A settlement was reached in an international legal drama over Picasso’s plaster “Bust of a Woman” pitting two of the world’s biggest art buyers against each other — New York billionaire Leon Black versus a member of Qatar’s ruling family. But who now owns the 1931 sculpture, depicting the artist’s then-mistress and muse, Marie-Therese Walter, remains a secret because details of the accord weren’t disclosed in a filing on Monday in New York federal court, and neither side is talking. The artwork was for years a prized possession of Maya Widmaier Picasso, a daughter born of the artist’s affair with Walter. Art gallery owner Larry Gagosian has claimed he agreed to buy the sculpture for $106 million last year to resell it to Black…

28/05/2016 (Emirates 24/7 – UAE): Roads and Transport Authority (RTA) has awarded a contract for Phase 4 and 5 of the Dubai Water Canal Project. According to the contract, which amounts to Dh703 million, works in both phases are set for completion by the end of September this year. Highlighting the latest phases of the project, Mattar Al Tayer, Chairman of RTA said: “Phase 4 of the Dubai Water Canal project, which costs about Dh307 million, is part of infrastructural works required to serve property development areas on both sides of the Canal, including roads & utility lines. “The Canal stretches 3.2 km from the Business Bay Canal up to the Arabian Gulf via the Sheikh Zayed Road (SZR), Al Wasl Road and Jumeirah Road. “Projects to be constructed on the Water Front will be served by modern water transport means, and result in improved quality of water in the Dubai Creek…

28/05/2016 (Asharq Al Awsat – UK by Tariq Alhomayed*):Our newspaper published a story about Iran allocating an annual budget for the Palestinian Islamic Jihad (PIJ) organisation after relations between them were restored. An official at the organisation’s press office said that Iranian support “is not an accusation” and denied that the organisation is affiliated to any party in the region. He also pointed out that the movement’s policy always focussed on “distancing Palestine from any axes”. Is this correct?Just by researching the PIJ and its relationship with Tehran on Iranian news sites or Palestinian ones that are supportive of the movement, the researcher finds a series of dramatic contrasts! In July 2015 the leaders of the movement announced “a state of anger” due to Iranian support being stopped and this resulted in the Secretary General of the PIJ Ramadan Shallah and his deputy not attending a meal organised by the Iranian Revolutionary Guards in the southern suburbs…

Opinion: Jihad With the Iranian Rial!

28/05/2016 (Arab News – KSA): BEIRUT: Fighting between Daesh and Syrian rebels near the Turkish border has killed dozens of people in the last two days, as Daesh militants keep up an offensive that has led to rapid territorial gains, a monitoring group said on Saturday. Fighters from the militant group entered the rebel-held town of Marea early on Saturday, using at least two car bombs in the assault, and clashes continued later in the day, the British-based Syrian Observatory for Human Rights said. An advance by the jihadists on Friday that cut Marea off from another key insurgent-held town, Azaz, was their biggest territorial gain in the northern province of Aleppo for two years, the Observatory said.
Daesh has been battling rebel factions fighting under the banner of the Free Syrian Army since late last year, but clashes have intensified in recent weeks…

28/05/2016 (Anadolu Agency – Turkey): A high-powered delegation from Russia, headed by President Vladimir Putin, arrived in Greece on Friday to sign a range of cooperation deals with Athens in a sign of increasing ties between the two states. Greek Prime Minister Alexis Tsipras met Putin during the official visit which is being held amid tight security. Police deployed 2,500 officers ahead of the two-day trip by the Russian president, closing all main streets leading to the center of the Greek capital. Accompanied by a large delegation of businesspeople, including several Russian ministers and the CEOs of energy giants Gazprom and Rosneft, Putin was welcomed by Greek Defense Minister Panos Kammenos. Putin later met Tsipras at Maximos Mansion where, after a marathon closed-door meeting between the two officials, talks continued between the two delegations…

21/05/2016 (Al Arabiya – UAE by Hisham Melhem*): For my generation of Arabs, the “Asia Minor Agreement”, better known as the Sykes-Picot Agreement, came to symbolize imperial betrayal and treachery, a secret scheme signed in May 1916 by Mark Sykes, a British diplomat, and François Georges-Picot his French counterpart representing the two victorious European Empires in WWI to divide the imperial inheritance of the dying Ottoman Empire. In the collective mind of the peoples living in what used to be called Asia Minor and the Fertile Crescent, Sykes and Picot became names that shall live in infamy, for they imposed an imperial construct by etching arbitrary lines and coloring zones of influence on a map, and establishing artificial entities over these regions that have been inhabited by a rich mosaic of peoples, ethnicities, cultures, and religions over millennia of successive civilizations…

*Hisham Melhem is a columnist and analyst for Al Arabiya News Channel in Washington, DC.

21/05/2016 (Gulf Times – Qatar): QDB and Qatar Shell will reveal six new business opportunities to Qatari small and medium enterprises at an event to be held here on May 30. The fourth annual ‘SME Business Opportunities Workshop’ is part of a nationwide strategy to support Qatari small and medium enterprises (SMEs). During the event, they will reveal six new specific tender opportunities for local SMEs to join Qatar Shell’s supply chain. Through its strategic partnership with QDB, Qatar Shell works to promote and accelerate the development of the private sector in Qatar, by presenting SMEs with the opportunity to become part of the supply chain for Pearl GTL, the world’s largest gas to liquids plant delivered by Qatar Petroleum and Qatar Shell…

21/05/2016 (Hurriyet – Turkey): The Turkish Culture and Tourism Ministry has sent an Emergency Red List to all museums, collectors and customs gates to prevent the perception that historical artifacts that have been stolen from Syria are being smuggled via Turkey. Many articles have appeared in the Western media suggesting that the stolen artifacts were sold via Turkey amid reports that the artifacts were marketed in the southeastern province of Gaziantep and that Turkey has closed its eyes to the situation. The Emergency Red List of Syrian Cultural Objects at Risk, prepared by the International Council of Museums (ICOM) in English, French, German and Arabic, has been translated into Turkish by the ministry. The artifacts on the list were not those stolen from Syria. But it is now known how many artifacts were stolen from the ancient cities that have been destroyed and looted by carious groups. ICOM has made the red list for the protection of the cultural artifacts of countries in which armed conflicts occur. The list is important especially for customs gates, museums, collectors, auction houses, art dealers and security forces since it raises awareness by providing information about the legislation of preservation of cultural artifacts under risk…